Preparing for a WordPress Hackathon

This past Friday, I participated in do_action – A hackathon where WordPress community members got together and helped 10 Austin area non-profits with their online presence.

This was my first hackathon, and while it went pretty well, I wanted to share a few tips that I think would’ve made me a bit more productive at the hackathon.

Setup a development site before the event

I think it goes without saying that if you are building a new design, developers shouldn’t be making changes directly to a production site. So, before we made any changes to the site at the hackathon, I had to setup a development site.

After everything was said and done, it took me nearly 3 hours to migrate the production site to another server – and even then, I wasn’t able to get all of the media. ?

Sounds crazy, right? But, shit happens. Here are some issues that I ran into:

These are all minor issues, but they take time. For example, given a day or two, I would have just waited to get FTP/SFTP access and a login to Code Canyon. But, given we were on a time crunch, we lost some time and had to find workarounds.

While my team did a great job of refreshing our organization’s website, we could have had a better start had I taken the time a week before to make sure that I had all of the information necessary to migrate the site.

Get media from the organization in advance

I’m pretty proud of how the site redesign turned out. Here is an image that shows before and after for the home page. 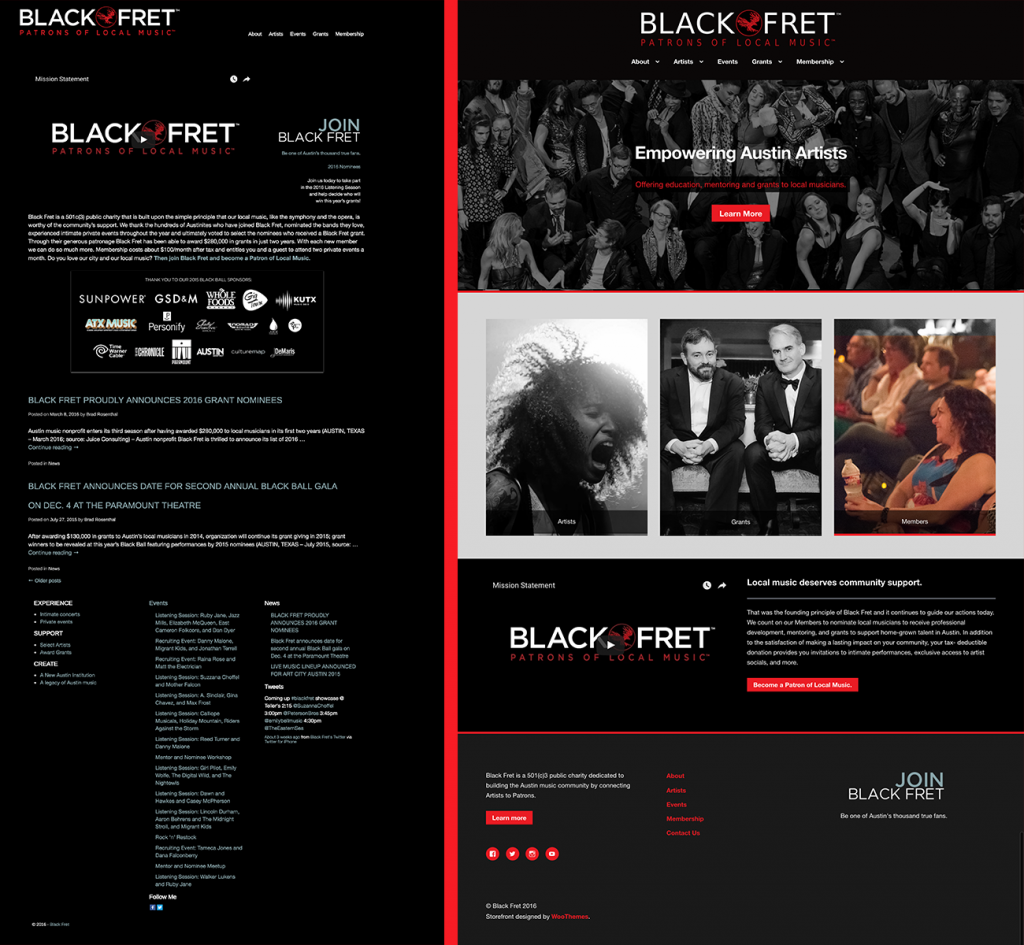 As you can see, the new design makes use of many more images. Our team had the benefit of working with a non-profit that had a large collection of images from various events. Having this media was a huge help to the designers in our team!

Because I only took one bag to Austin for the entire week, I made the decision to only bring my Macbook charger block, and not the longer extension cord. Having just the charger block usually works for me on my day-to-day.

But, at the hackathon, they had to chain power strips together to get power to everyone which caused two issues for me.

First, the location of the power strip for my team was at one end of the table. So, I didn’t have the flexibility to sit anywhere I wanted if I needed to talk to someone.

Second, since the charger block is large, it can block outlets that others need. :/

These issues weren’t the end of the world, but I wouldn’t have even ran into them if I had the longer charger cord. 🙂

Have any other tips?

These were a few things that stuck out to me after my first hackathon. Have you picked up any other tips?

If so, leave a comment below and let us know what your favorite tip is.